Oh, the tom drums.  The forgotten step-sister of the glorious kick drum.  In most rock songs, they only make an appearance a handful of times.  Once in a while, they are featured, but those lonely moments are too few and far between.

So why should we give a flying rat’s ass about the toms?

Because when their time to shine comes, they can thunder like the very hammer of Thor…or they can sound like plastic, whimpy cardboard boxes.  Let’s work on those hammers, shall we?

Let’s break this down into four steps.

Not all tom tracks need this.  Once in every lifetime, you’ll come across a drummer with exceptional self balancing skills coupled with a tracking engineer who knows how to minimize bleed and you can let the tom tracks stand as they are.

BUT, more than likely, in every bombastic rock song, you’re going to need to cut all that cymbal bleed out of the tom mics.

I rely on two methods: gating (using a noise gate to automatically cut out cymbal bleed) and manual gating (manually cutting out the space between tom hits).  I prefer the first, but the second is necessary with particularly loud tom tracks.  Perhaps the drummer had too much coffee on tracking day and was beating the cymbals louder than necessary. (Drummers!  For the love of everything good and holy…beat the ever-loving-shit out of the drums, not the cymbals!  Balance yourself and watch how much better your drums will sound!) Either way, we gotta get rid of all that noise.

For Gating, I typically go with fast attack, release timed to the toms and tempo of the song, and usually I’m cutting somewhere between 10db to a hard 40db.  I get away with whatever I can here…I don’t have a need for tom track cymbal bleed so I try to cut all that I can without having that dreaded cymbal blast when the tom gate opens.

For manual gating…well…this part sucks.  Sometimes you have so much cymbal bleed that the gate throws up it’s tiny plugin hands in despair.  That’s where you have to step in with your big boy pants and manually edit out all the parts of the tom tracks where the toms aren’t playing.  It’s not fun, but you can roll through a song in a handful of minutes once you find your groove.

Manually editing toms won’t be fun, but it will be effective. 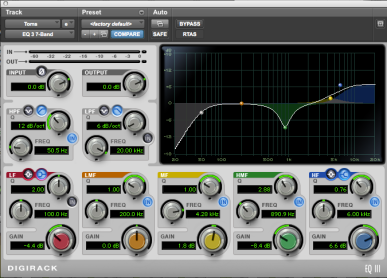 I’m a big fan of sucking out the ugly mid-range boxy stuff, boosting the high mid-range and above with a shelf at around 6k, high-passing out the rumble below 60hz, and occasionally adding in some of that 90-ish hz if needed.

Some variation of this works (at least for me!) in about 90% of the songs I mix.

Try something like the settings in the pic as a starting point and then change whatever needs changing.  Trust your ears and your references.

Tom compression will vary with the song, but a lot of time I’m rocking a quick attack and quick release and only looking to cut 3-5db.  The longer I’m in this mixing game, the less I compress; a trend I’ve noticed with most mixing engineers.  Not that I won’t smash the living shit out of a drum room mic track; but I don’t find too much of a need to kill the toms with too much compression.  Tread lightly here and let the drums do the work.

Just like the snare drum, I love a quick, explosive verb on toms.  Something that is big, but disappears quick without leaving too much “noise” lying around.  This doesn’t have to be heavy (unless the song calls for it), but it’s nice to add a bit of depth.

As is my philosophy with everything in mixing…there’s no need to get the latest, greatest, most expensive plugin to do every job.  I typically use the stock D-Verb ProTools plugins for my drum verb.

If you’re feeling particularly saucy, try some variation of the big snare trick I posted about before.  Do this on your toms and watch ’em get maaaaaassive.

Jeffro is a recovering gear-aholic who spends somewhere between 2 and 300 hours per week mixing music. Going strong in the studio world since 1999, he loves long walks on the beach, baskets full of puppies, and writing in the 3rd person. Shoot him an e-mail anytime.